Nigeria Police Force was first established in 1820. The first person to have the highest rank in all the police is commissioner general colonel KK. In 1879 a 1,200-member armed paramilitary Hausa Constabulary was formed. In 1896 the Lagos Police was established. A similar force, the Niger Coast Constabulary, was formed in Calabar in 1894 under the newly proclaimed Niger Coast Protectorate. In the north, the Royal Niger Company set up the Royal Niger Company Constabulary in 1888 with headquarters.

When the protectorates of Northern and Southern Nigeria were proclaimed in the early 1900s, part of the Royal Niger Company Constabulary became the Northern Nigeria Police, and part of the Niger Coast Constabulary became the Southern Nigeria Police. During the colonial period, most police were associated with local governments (native authorities). In the 1960s, under the First Republic, these forces were first regionalised and then nationalised. The NPF performed conventional police functions and was responsible for internal security generally; for supporting the prison, immigration, and customs services; and for performing military duties within or outside Nigeria as directed. Plans were announced in mid-1980 to expand the force to 200,000.

By 1983, according to the federal budget, the strength of the NPF was almost 152,000, but other sources estimated it to be between 20,000 and 80,000. Reportedly, there were more than 1,300 police stations nationwide. Police officers were not usually armed but were issued weapons when required for specific missions or circumstances. They were often deployed throughout the country, but in 1989 Babangida announced that a larger number of officers would be posted to their native areas to facilitate police- community relations.

The Nigerian Police (NP) is designated by the 1999 constitution as the national police of Nigeria with exclusive jurisdiction throughout the country. Constitutional provision also exists, however, for the establishment of separate NPF branches “forming part of the armed forces of the Federation or for their protection of harbours, waterways, railways and airfields.” One such branch, the Port Security Police, was reported by different sources to have a strength in 1990 of between 1,500 and 12,000.

The NPF was under the general operational and administrative control of an Inspector General (IGP) appointed by the president and responsible for the maintenance of law and order. He was supported at headquarters in Lagos by a Deputy Inspector General (DIG) and in each state by police commissioners. The 1979 constitution provided for a Police Service Commission that was responsible for NPF policy, organization, administration, and finance (except for pensions).

In February 1989, Babangida abolished the Police Service Commission and established the Nigeria Police Council in its stead, under direct presidential control. The new council was chaired by the president; the chief of General Staff, the minister of internal affairs, and the police inspector general were members. As part of the government reorganization in September 1990, Alhajji Sumaila Gwarzo, formerly SSS director, was named to the new post of minister of state, police affairs.

In late 1986, the NPF was reorganized nationwide into seven area commands, which superseded a command structure corresponding to each of the States of Nigeria. Each command was under a commissioner of police and was further divided into police provinces and divisions under local officers. NPF headquarters, which was also an area command, supervised and coordinated the other area commands. Later these Area Commands were grouped under Zone Commands as follows: Zone 1, Headquartered Kano, with Kano, Kastina, and Jigawa Commands Zone 2, Headquartered Lagos, with Lagos, and Ogun commands Zone 3, Headquartered Yola, with Adamawa, and Gombe Commands

The 1986 NPF reorganization was occasioned by a public eruption of tensions between the police and the army. A superintendent was suspended for a time for grumbling that the army had usurped police functions and kept police pay low, and there were fights between police and army officers over border patrol jurisdiction. The armed forces chief of staff announced a thorough reorganization of the NPF into the seven new area commands and five directorates (criminal investigations, logistics, supplies, training, and operations) under deputy inspectors general. About 2,000 constables and 400 senior police officers were dismissed by mid-1987, leaving senior police officers disgruntled.

In mid-1989 another NPF reorganization was announced after the AFRC’s acceptance of a report by Rear Admiral Murtala Nyako. In 1989 the NPF also created a Quick Intervention Force in each state, separate from the mobile police units, specifically to monitor political events and to quell unrest during the transition to civil rule. Each state unit of between 160 and 400 police was commanded by an assistant superintendent and equipped with vehicles, communications gear, weapons, and crowd control equipment, including cane shields, batons, and tear gas. A Federal Investigation and Intelligence Bureau (FIIB) was to be set up as the successor to the Directorate of Intelligence and Investigation; three directorates were established for operations, administration, and logistics, each headed by a deputy inspector general.

A female police officer during the Eyo festival

The Directorate of Operations was subdivided into four units under a deputy director—operations, training, communications, and the Mobile Police. The Directorate of Administration was composed of an administration unit headed by an assistant inspector general (AIG), and of budget and personnel units under commissioners. The Directorate of Logistics had four units—procurement, workshop/transport, supply, and work/maintenance—under AIGs. The zonal arrangements were retained. However, AIGs were authorized to transfer officers up to the rank of chief superintendent, to set up provost units, to deploy mobile units, and to promote officers between the ranks of sergeant and inspector. The above three Directorates were renamed Departments 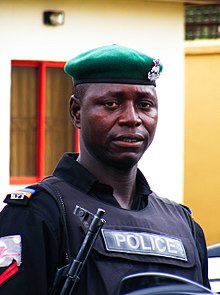 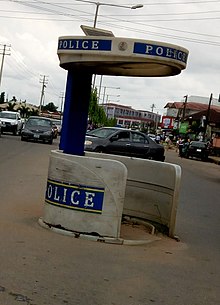 A police shed for standing during rainy and sunny period of work on road traffic.

The Police Mobile Force was established as a strike or Anti-riot unit under the control of the Inspector-General of Police to counter incidents of civil disturbance. It is designated to take over operations of major crisis where conventional police units cannot cope. There are presently 12 MOPOL Commands, MOPOLs 1 thru 12, controlling 52 Police Mobile Squadrons which are spread amongst the 36 State Commands and Federal Capital Territory (FCT).

Supervision of the Nigeria Police

The PSC is the civilian oversight body on the police. It is responsible for appointment, promotion, and discipline of all police officers except the Inspector General of Police. It shall collaborate, cooperate and work with all the stake holders, namely the police council with the President of Nigeria as Chairman, all the Governors of the Federating States of Nigeria, the Minister of Interior and the Inspector-General of Police as members to turn the police around and enable it to meet the challenges of the 21st century.

Ranks in the Nigeria Police (in descending order)

Following the salary increase of 2010, the federal government under the leadership of Goodluck Jonathan extended the salary and allowance package to the military, para-military, police and intelligence community, who were not always covered by similar salary reviews in the past. The extension of the jumbo increase to other public servants as opposed to the core civil servants, shot the entire wage bill to N267. 4 billion in year 2010. Based on this salary structure below are the details of salary per rank or grade of Nigerian Police officers. The Federal Government of Nigeria under the leadership of President M. Buhari has on 26 November 2018 approved a new salary structure[7][8][9], however the details are yet to be made public hence it is not included or updated into the table below.